“I was just a kid when my family moved to Sarasota in 1930. I remember playing on the veranda of the then-vacant ‘El Vernona,’ a grand hotel that had fallen on hard times during the real estate crash. The hotel was designed by Dwight James Baum. He was the architect of John Ringling’s Ca’ d’Zan and the Sarasota County Courthouse.”

“In the early 30s, Ringling acquired the building and it became the “John Ringling Hotel,” regaining its Roaring Twenties grandeur. It was an impressive place when I made the sketches for this painting. I sat in the alley across the street and tried to fantasize the opulence that wealthy tourists must of experienced while guests of this extravagant hotel.”

By the end of the 1950s, the John Ringling Hotel had lost its luster. It became an apartment house known as the “John Ringling Towers” in 1964. The building was finally closed in the early 1980s. Throughout the 80s and 90s, the building had several different owners, each with a plan to return the hotel to its early splendor. None of the plans ever materialized, and the once-grand John Ringling Hotel was torn down in 1998. 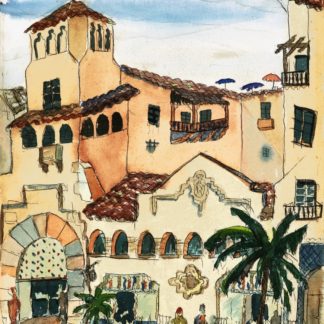